Normally I am very good at starting and finishing blogs but this time it is totally different as I don’t know where to start. Most people start from the beginning and finish at the end. I am going to start with the words mind blowing, exceptional and amazing. Even for me when I have been ski coaching for 16 years this three day hut to hut big mountain ski touring adventure in the Espace Killy is up there with the best. Nothing was set in stone, plans weren’t rigid or even completed. I knew I had three days off work and I wanted to escape and to explore the backcountry and I choose three companions to join me, Steve, Jerry and the adventurer Squash Falconer. I had decided that the first day was about my goal. The second day was to conquer Steve’s goal and the third to conquer Squash’s goal which was to ski tour up Pointe De La Sanna the third largest peak in the Vanoise National Park.

Day 1: Val Claret to Pointe Vallasionnay 3020m to Col De Croix and Col du Palet to refuge Leisse, 16th April 2016
With heavy snow falling in the village of Val Claret it was uncertain what the day or how the day would plan out. With Jerry out of the adventure due to a broken collar bone Squash, Steve and I pushed for the summit.  To Summit the Pointe de Vallasionay has always been a goal of mine in which I have tried twice to accomplish and hadn’t succeeded due to weather and the lack of skill and fitness of my companion. With a weather window this time it was possible.  We were surrounded by pure beauty and silence of the backcountry until the French Ski Touring military was on our same route who we lost as we scrambled over the back of the pointe and made our own solitary ski tracks in unknown territory. The sense of freedom was overwhelming and with noone in sight. Once we skied to the valley floor, we then skinned up and around Aiguille Noire back to Palet then into Val Claret with a race against time to get the last chairlift to the top of the glacier then a skate to the refuge Leisse. We arrived at the refuge closer to 6pm with a hunger in our stomaches and a sense of achievement.

Day 2: Refuge De La Leisse to Refuge Femma 17th April 2016
Waking up to silence and beauty with no social media allowed our batteries to be recharged   and our minds to think freely. Without Steve on Day 2 and with Squashes physical fitness, mind set and with my mountain skills our thought process and plan changed completely. We knew that we could ski tour up Pointe De La Sana anytime but I wanted to tick of a bigger challenge. A peak that is more unknown which stands out from the rest, the peak of Mean Martin 3330m which is on the far edge of Vanoise National Park. It was a peak that could only be achieved by getting to Refuge Femma. With only 400m vertical to climb and a 7km distance I knew it wouldn’t be a big day on the hill but it would take on a totally different challenge. The challenge of navigation in poor visability on a unknown route.  With a clearer weather window the following day we both knew that it would be achievable to reach Mean Martin if we could get to refuge Femma.  We decided to go for it. From the refuge de Leisse at 2487m we headed South touring up the steep slope of Cotes De Leisse dessus in a ‘Un Jour blanc’ (white day) to the french, the English call it a white out. With low visibility and seeing only a maximum of 15 m at a time we were navigating point to point. Feeling the terrain putting it to the map and using bearings with escape routes if necessary. Its one thing knowing where you are but it is also so important to know your escape routes and how to get out and get home. We were welcomed with a break in the clouds at Col De Pierre Blanche 2842m. Skiing down down from the Col was relaxing as we started to take the itinerary route down to refuge de la Femma with only 5km to travel and a vertical drop of 380m we were then engulfed in thick fog. It was a temperature inversion and I knew it wouldn’t lift till the next day. Keeping in a bandwidth of 100m heading east our visibility went to nul. I wasn’t able to see two ski lengths away not alone Squash 4m away. With a cliff drop below and a rock band above, we then had to find the steep gully to take us to the back of the refuge. I knew that the consequences of getting the route wrong was lethal at this time. I had to think quick on my feet and think instinctively and we needed a change of tactic. Working together as a team and with trust we changed direction and headed South and found the river Genervrey which we followed all the way down to the valley floor. We called it Relief River as we were both relieved to be able to see as we skied to the valley floor and then continued East to the refuge de la Femma.

Day 3: Refuge De La Femma to Pointe de Martin back to Tignes, 18th April 2016
Keeping an eye on weather outside of the window from the refuge I was getting excited about the adventure ahead and after a rested and peaceful night which included a shower  we were head of schedule being on our skis at 7.26am with a 4hr tour in front of us to the pointe and being chased down by a new weather front which was following us. With the fresh snow there was no tracks in sight just vastness of white snow and endless route opportunities. The peacefulness and the beauty of the backcountry was overwhelming and exhilarating. We were miles from anyone and with no sighting of human activity. We we three ridge lines and 5.5hrs of skinning uphill away from our home in Tignes. I just love the feeling of being closer to nature and the solitariness of the mountains and the immense freedom that you get being in the backcountry.

Once again ahead of schedule we were pleased to reach the summit of Mean Martin 3330m just after 11am after 3hrs 27mins of touring uphill. Leaving our mark on the mountain we skied fresh snow off the pointe and headed for Plan Des Fours where we ski toured up and dropped into a famous popular ski touring route Col De Fours. Stopping for refreshments in a solitary mountain restaurant off cugnei we then returned into the hustle and bustle of the Manchet Valley which took us into Val D’Isere and then back on the pistes to Tignes. What an adventure and finally a few goals ticked off.

Watch the amazing video of the ski down from Pointe De Mean Martin 3330m.

So I will finish this blog with the words that I started with mind blowing, exceptional and amazing adventure and now I am looking forward to the next one.

If you would like to ski this route or another route similar please get in contact with FREEFLO. FREEFLO specialises in progressive on and off piste skiing, backcountry ski touring and women specific ski courses in Tignes, Val D’Isere, St Foy and La Grave. Please visit our site: www.freefloski.com  and join our newsletter for free. Like us on Facebook and Instagram and we will keep you up to date on posts, photos and videos for free. Check out more adventures with Squash at squashfalconer.com. 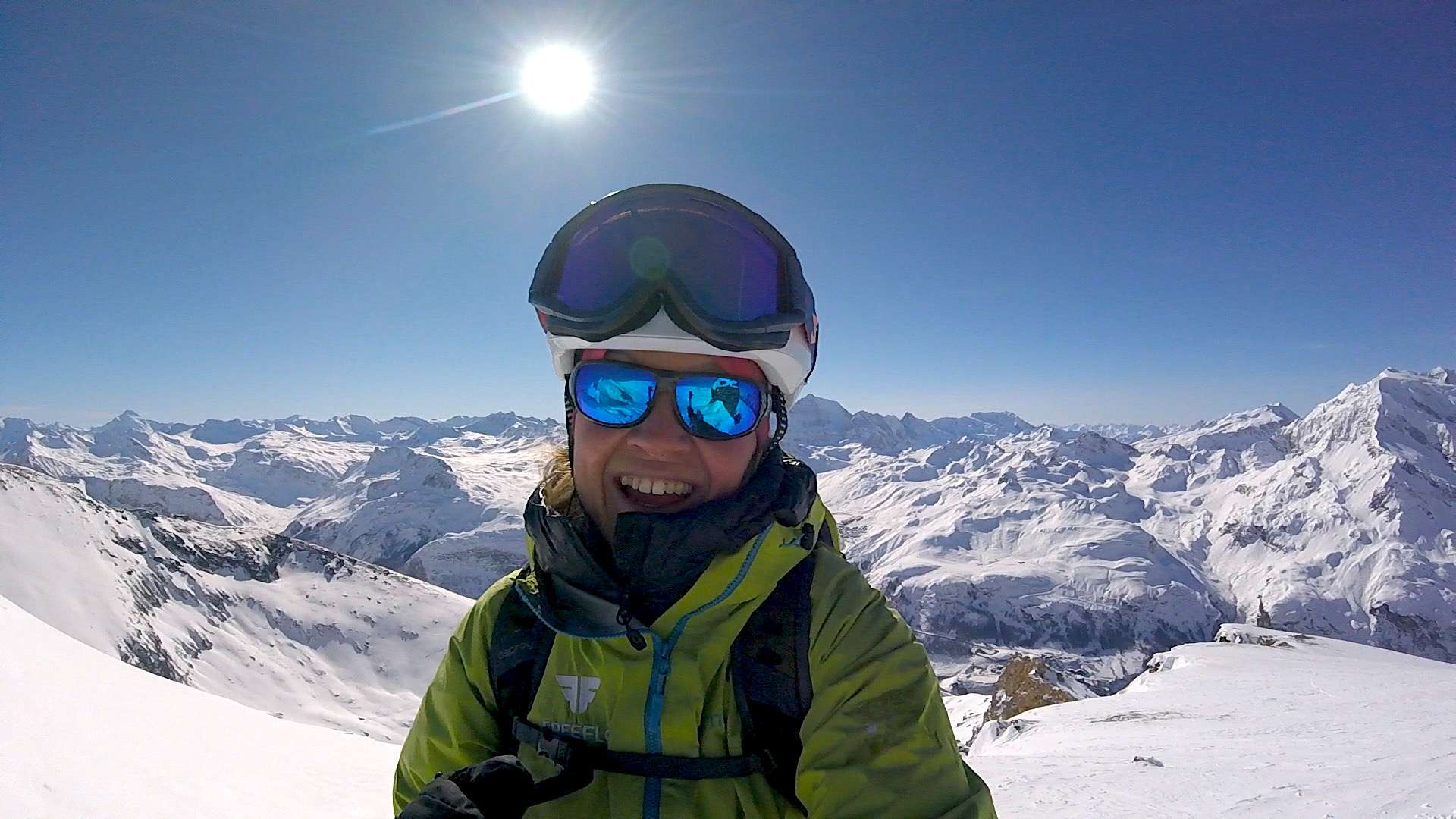 With no ski lifts open this winter in France due to Covid 19 the only way to make some turns is earning them and ski touring uphill. The ski touring route to Rocher De La Davie is not only a beautiful touring route of wilderness and sheer beauty. But it is also a special route […] 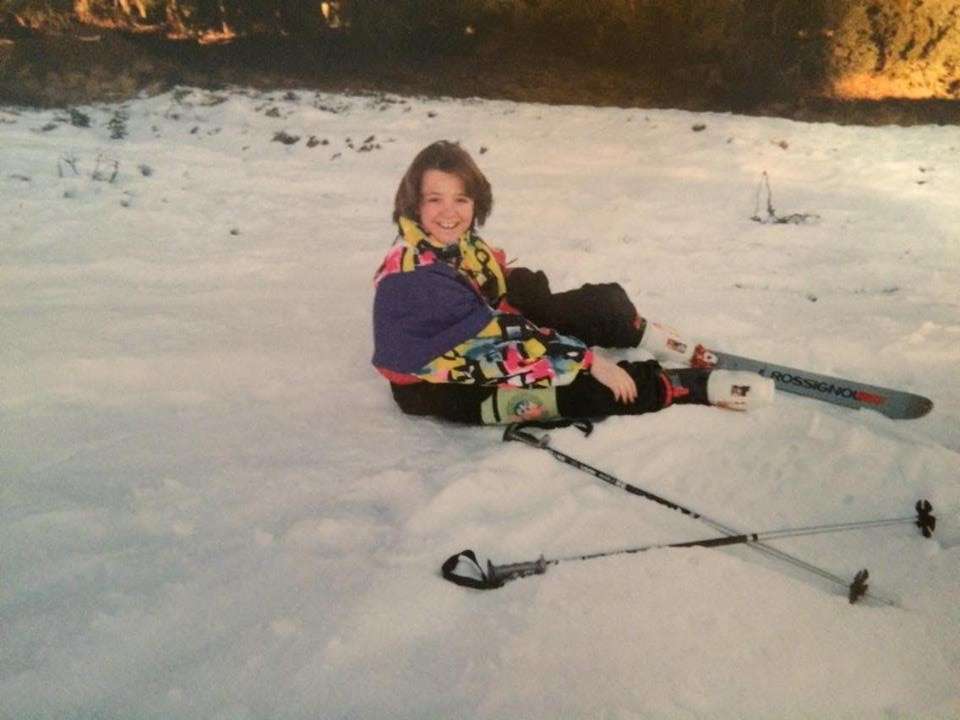 How my ski dream turned to reality- My Story Freefloski

‘Ski teaching is not a proper job… Get a proper job…’ is what everyone would tell me. My story is different from most other stories. The majority of ski instructors come from a ski racing background. They are people who are born in the mountains and on skis. Just like you, I was an ordinary British […] 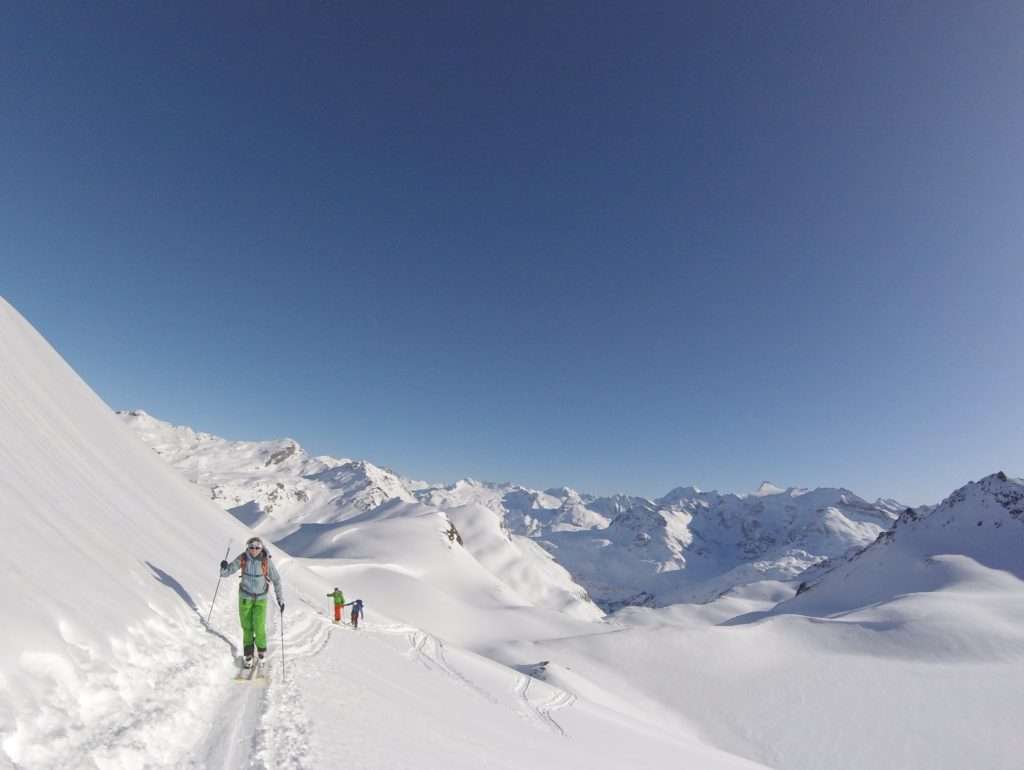