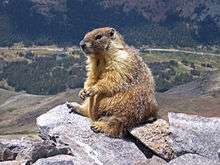 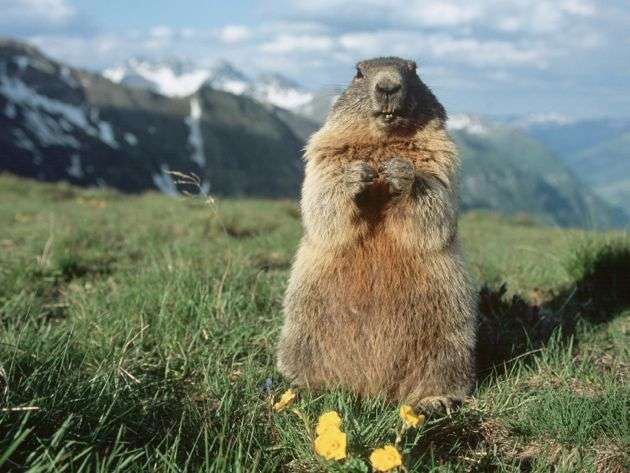 The Alpine Marmot- It wasn’t until the end of the season sharing a chairlift with some kids going up to the Tranquil ski area in Tignes was when I was asked a question about marmots that I realised how little I knew about them.

Marmots are large squirrels in the genus of Marmota, of which there are 15 species. Marmots mostly live in mountainous areas, such as the Alps and the northern Rockies. The groundhog of North America is a lowland marmot.

Marmots typically live in burrows often within rockpiles, particularly in the case of the yellow-bellied marmot), and hibernate there through the winter. Most marmots are highly social and use loud whistles to communicate with one another, especially when alarmed.

The etymology of the term “marmot” is uncertain. It may have arisen from the Gallo-Romance prefix marm-, meaning to mumble or murmur. Another possible origin is post-classical Latin, mus montanus, meaning “mountain mouse”.

Beginning in 2010, Alaska celebrates February 2 as “Marmot Day”, a holiday intended to observe the prevalence of marmots in that state and take the place of Groundhog Day.

During the summer, marmots gain weight in order to prepare for hibernation. They usually hibernate all winter and may lose as much as half their body weight by February.

The Refuge De Leisse is behind the Grand Motte glacier in Tignes and can be accessed by many different routes. After my second season of ski teaching and guiding in the Espace Killy I am still amazed as to what this area has to offer. There are so many good off piste and ski touring […]

Winter 2017/18 still continues….spring skiing and ski touring in Val D’Isere and Tignes  This winter the snowfall across the French Alps has been phenomenal.  Locals of Tignes have said that it has been the best winter for snowfall in twenty years.  Out of the my twenty winter seasons it has been one of my biggest snowfall […]